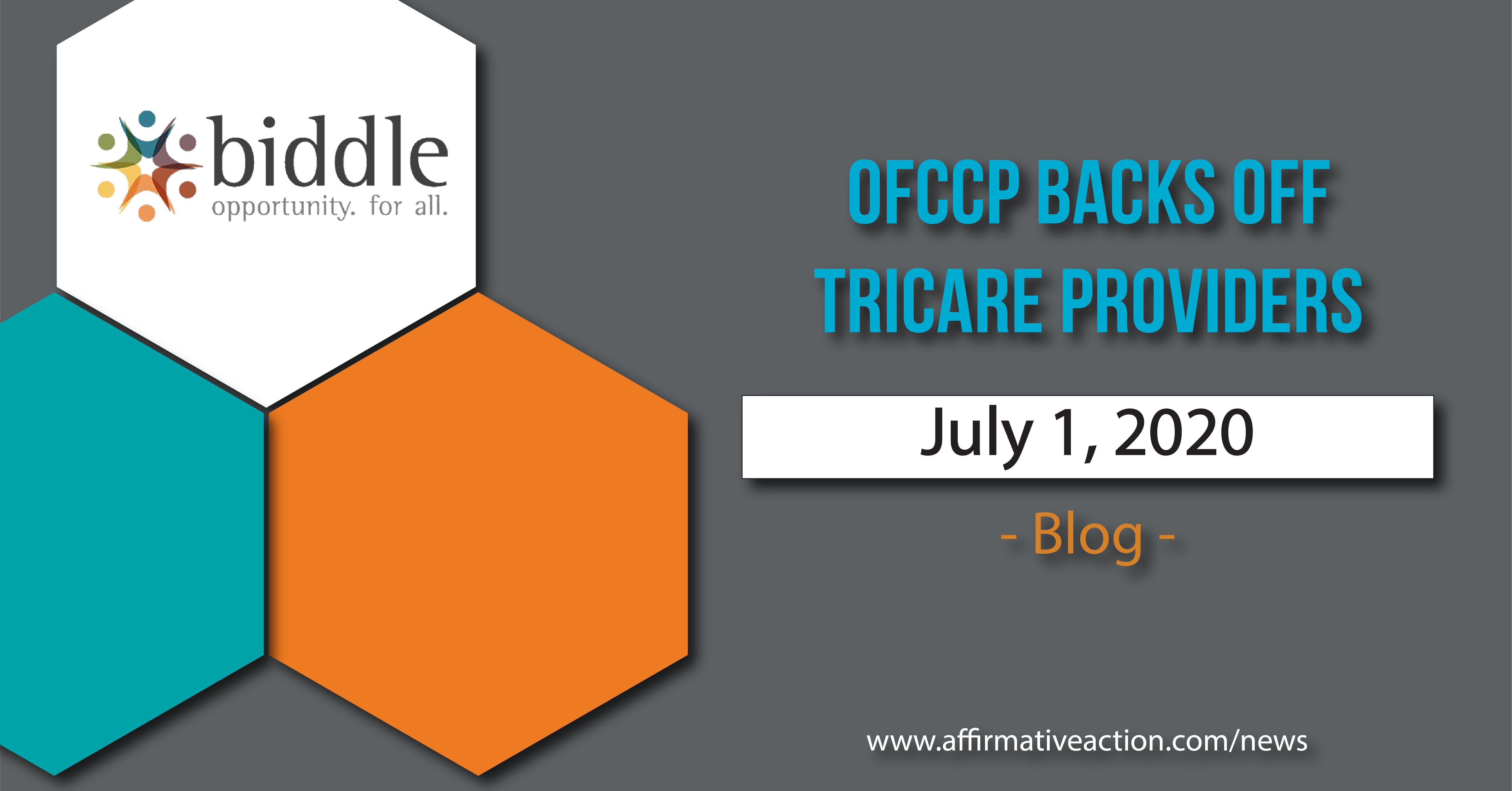 In a final rule set to be published in tomorrow’s Federal Register, the Department of Labor’s Office of Federal Contract Compliance Programs (OFCCP) will finally put to bed the question of whether or not TRICARE contracts confer agency jurisdiction—they do not.

TRICARE, managed by the Defense Health Agency, is a federal health care program serving uniformed service members, retirees, and their families. Under the program, TRICARE administrators contract with individual health care providers to create a provider network for an HMO-like program. In 2007, the OFCCP faced litigation over its enforcement authority based on TRICARE contracts, owing to the underlying legislation’s wording, clear legislative intent, and the OFCCP’s own regulatory definition of “government contract.” The OFCCP tied itself in knots arguing to retain jurisdiction, even after clarifying language was added to the legislation to specifically exempt TRICARE contracts from OFCCP’s reach.

Rather than face a potential adverse ruling in court, the agency suspended “TRICARE audits” while they reviewed and further analyzed the law. Under that moratorium, the OFCCP did not initiate audits based on a contractor holding a TRICARE agreement. However, if the contractor held any other qualifying federal contract, the agency was free to move forward with enforcement and did so. In other words, health care providers could not shield themselves from OFCCP jurisdiction simply by entering into a TRICARE contract.

With the publication of the final rule, the OFCCP merely makes that moratorium permanent—nothing changes for TRICARE contractors.

However, some initial reporting has sewn some confusion, indicating that the TRICARE final rule is a broader exemption than it is, even going so far as to describe the agency’s action as a “slippery slope” potentially leading to blanket enforcement exemptions. This is, frankly, just untrue.

One does not even need to read past the executive summary of the final rule to find clear language explicitly noting that the “TRICARE exemption” is not an exemption at all. Holding a TRICARE contract is not a “get-out-of-jail-free” card of any sort. TRICARE contracts are simply not “government contracts” under the OFCCP’s regulations, so entering into a TRICARE contract does not make an organization a “federal contractor.”

However, if a TRICARE contract-holding provider also holds a different, qualifying “government contract,” they are still a federal contractor subject to the full panoply of equal employment opportunity and affirmative action obligations (subject to existing contract value and employee thresholds). This should not be unfamiliar to health care providers that hold, say, Medicare contracts.

In the OFCCP’s final rule, the agency provides two reasons for making the existing TRICARE moratorium permanent. The first reason is that they do not qualify as “government contracts,” but the agency also notes that, if their interpretation of the law in that respect turns out to be incorrect, it is also exercising its enforcement discretion under the well-established “national interest exemption.”

The national interest exemption has most often been invoked in response to natural disasters such as hurricanes. In an effort to encourage private contractors to “pitch in” on relief and rebuilding efforts, the exemption is applied to those contracts. And it works exactly the same way as the current TRICARE moratorium—those hurricane relief contracts are exempted from the OFCCP’s definition of “government contract.” The contractor, however, is not exempted, just the contract. So an existing federal contractor cannot exempt their organization from OFCCP jurisdiction simply by entering into a hurricane relief contract.

Historically, the OFCCP has been fairly stingy with the national interest exemption. For instance, despite compelling arguments from certain defense contractors regarding classified work at classified facilities—the location of which they might be prohibited from even disclosing—the agency is famously reluctant to let such contractors “off the hook” based on a national interest argument.

And national interest exemptions for hurricane relief efforts over the past decade have always included a limited time frame for executing “exempted” contracts. In other words, after a certain period, even those hurricane relief and rebuilding contracts always fall back into the definition of a “government contract.” True, this national exemption would be permanent, but only as permanent as TRICARE.

National interest exemptions are nothing new, have never operated as a “shield” from EEO/AA obligations, and the OFCCP has not indicated any intention to deviate from longstanding practices in this area. So it is unclear where these “slippery slope” concerns originate.

The only thing that happens with the publication of the OFCCP’s final rule here is that health care providers will now have finality on the TRICARE contract issue.