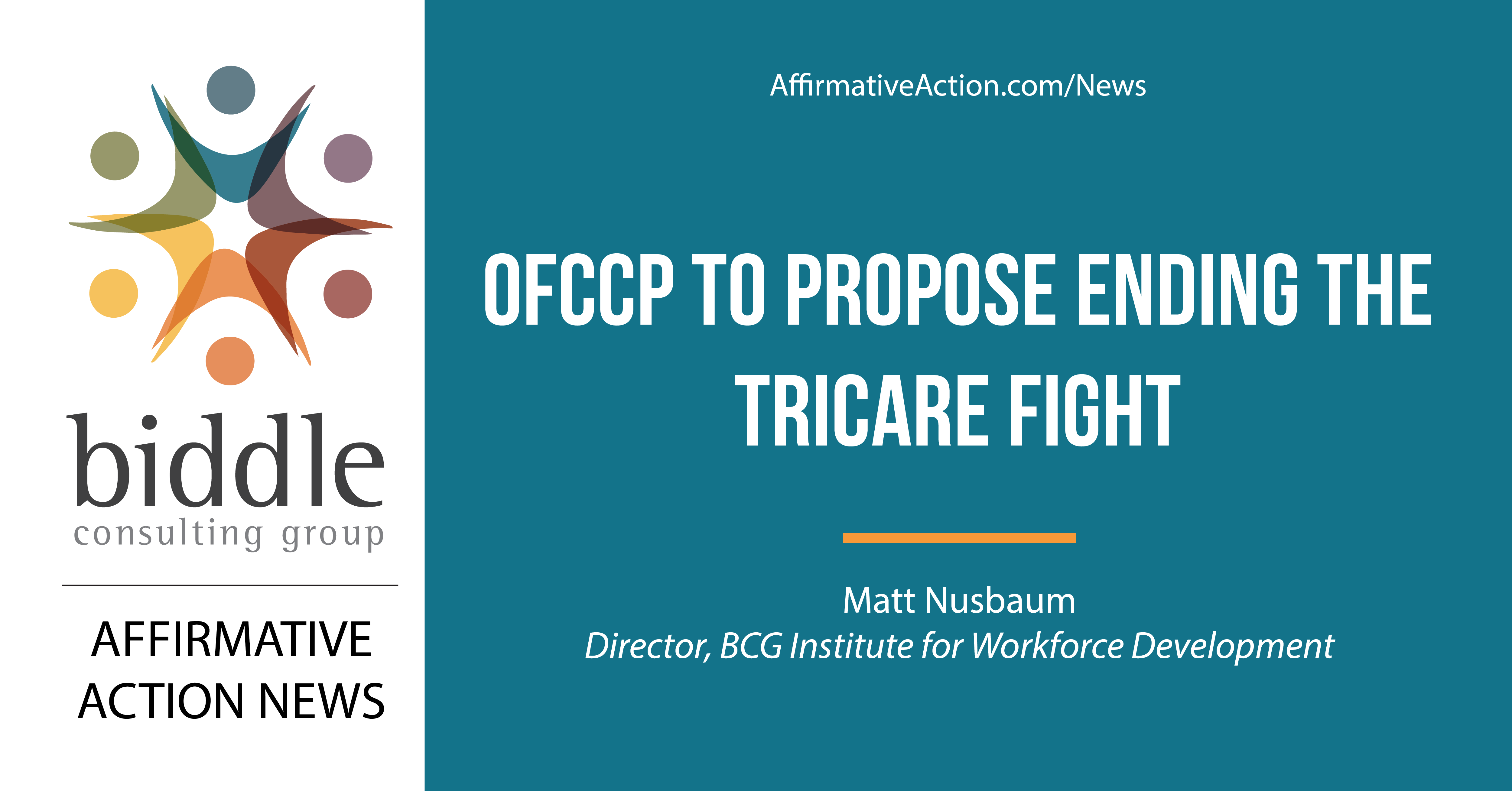 In tomorrow’s Federal Register, the OFCCP will publish a Notice of Proposed Rulemaking meant to end the agency’s decade-long fight over whether and to what extent TRICARE providers fall under OFCCP’s jurisdiction by effectively making the existing TRICARE moratorium permanent.

TRICARE is an HMO-like federal managed health care program serving uniformed service members, retirees, and their families and is managed by the Defense Health Agency (DHA) within the Department of Defense (DoD). DHA contracts with managed care support contractors that, in turn, enter into agreements with individual and institutional health care providers to create provider networks for the program. From the start in 1997, the OFCCP considered TRICARE contracts, both prime and subcontracts, as qualifying contracts under the agency’s regulations implementing Executive Order (E.O.) 11246, Section 503 of the Rehabilitation Act, and the Vietnam Era Veteran’s Readjustment Assistance Act (VEVRAA).

But the OFCCP is understandably protective of its authority. The agency has long asserted (quite successfully) that other federal agencies do not have the authority to exempt contractors from OFCCP jurisdiction. And although a determination by the ARB would be the final say on behalf of the Department of Labor, of which the OFCCP is a part, the ARB did not decide the federal assistance question. Rather, it remanded the case to the lower administrative court, the Administrative Law Judges (ALJ) to render an initial opinion that could then be challenged before the ARB (but never did and never was). Finally, the OFCCP balked at even Congressional legislation deciding the issue for a host of complicated reasons. For one, Congress did not amend Section 503 or VEVRAA, and arguably does not have the authority to amend E.O. 11246.

A little under a year before the initial moratorium was set to expire, the OFCCP issued a new directive extending the moratorium until May 7, 2021. The agency expressed concern that OFCCP jurisdiction over TRICARE providers would hinder the ability of military families to access needed healthcare and determined that it would be in the national interest to extend the moratorium to both provide the agency with additional time to assess the situation and for potential further action by Congress.

Now almost exactly one and a half years before the current TRICARE moratorium is set to expire, the OFCCP is throwing in the towel, but is still reluctant to do so permanently. The draft Notice of Proposed Rulemaking floats two possible avenues for deciding the TRICARE question: 1) Changing the regulatory definition of “subcontract” to explicitly exclude TRICARE contracts in the regulations implementing E.O. 11246, Section 503, and VEVRAA; or 2) Establishing a group exemption for TRICARE providers that do not hold separate, qualifying federal contracts.

The health care community is likely to support the first option, changing the OFCCP’s regulatory definition, because that would be much harder for the agency to reverse later. Regulatory changes are subject to, among other things, the Administrative Procedure Act and the Paperwork Reduction Act that prevent federal agencies from revising regulations on a whim. An exemption, on the other hand, is the agency simply exercising its enforcement discretion. That is akin to an internal agency policy or procedure which can be much more easily changed.

However, the OFCCP appears to be amenable to both changing the agency’s regulations and establishing an exemption. The agency is clearly concerned with providing health care providers, particularly those considering participating as TRICARE providers, with certainty. In the event that the agency’s legal analysis is somehow deemed to be incorrect, potentially invalidating the regulatory change, the exemption could act as a backstop. By doing both, the OFCCP signals to the healthcare community that even if the agency doesn’t have to exempt TRICARE subcontractors from its jurisdiction, it wants to. So, for instance, if a future Congress passes legislation to explicitly include TRICARE providers under the OFCCP’s jurisdiction, the agency still has the authority to leave the exemption in place.

Note that when and if the OFCCP’s proposal is enacted, nothing actually changes for TRICARE providers. The OFCCP’s proposed actions effectively make the existing TRICARE moratorium permanent. The policy implications are significant, but the practical implication is essentially a collective sigh of relief.

Note also that TRICARE prime contractors have always been and will remain subject to the OFCCP’s regulatory requirements and jurisdiction. Only TRICARE subcontractors (providers) are exempted.

Finally, note that entering into a TRICARE contract is not a “get-out-of-OFCCP-jurisdiction-free” card. The OFCCP will not initiate an audit or investigation based on a TRICARE subcontract, but will happily knock on your door if you hold a different type of qualifying federal contract.

The OFCCP’s draft notice is available here. Once published in the Federal Register, the public will have 30 days to submit comments (the deadline should be Friday, December 6, 2019). To submit electronically, go to http://www.regulations.gov and search for Regulatory Information Number 1250-AA08. Comments can also be submitted by mail, hand delivery, or courier addressed to Harvey D. Fort, Deputy Director, Division of Policy and Program Development, Office of Federal Contract Compliance Programs, 200 Constitution Avenue NW, Room C-3325, Washington, DC 20210.