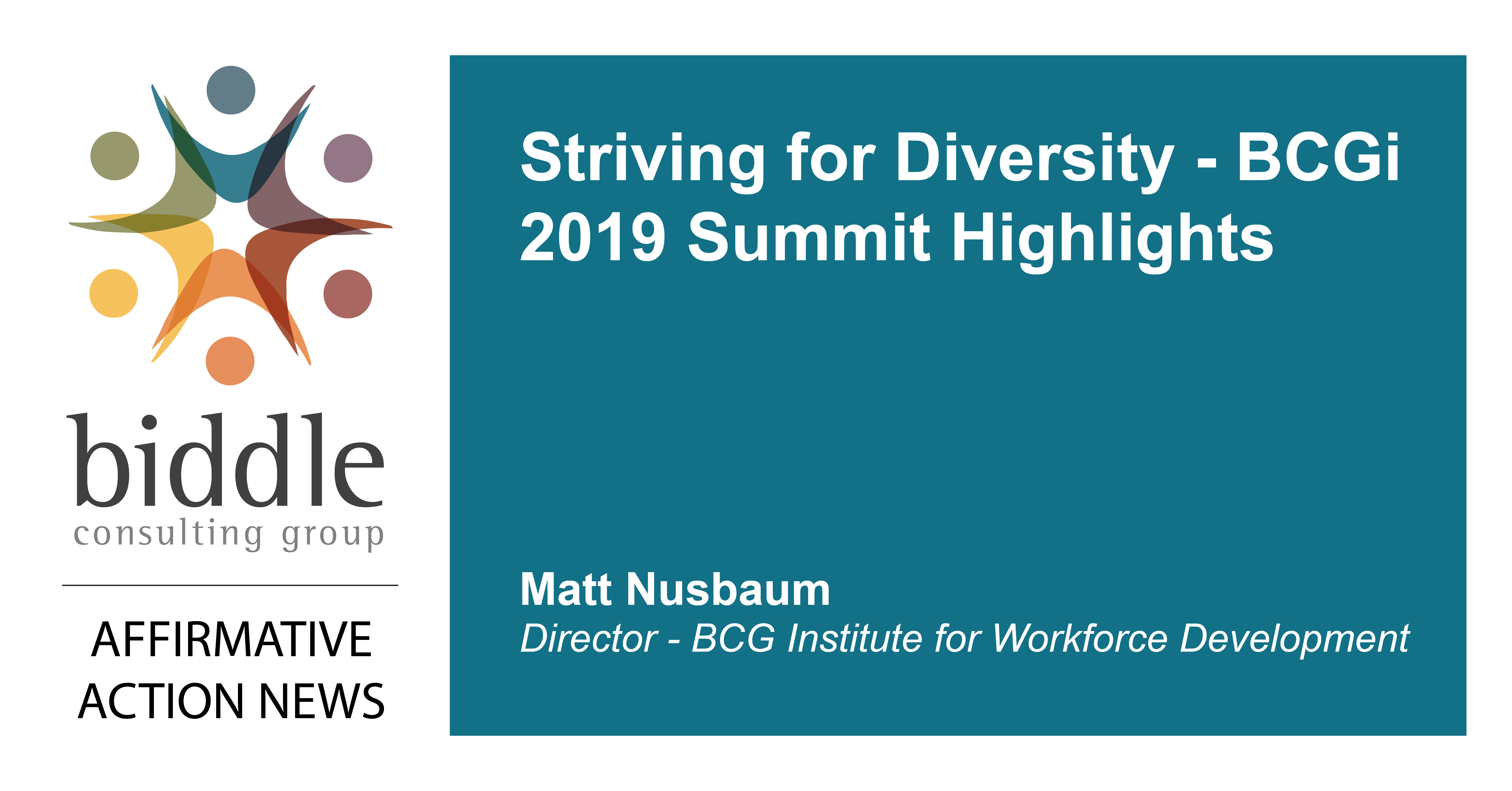 On April 4th and 5th BCGi hosted its fourth annual Summit in San Francisco. This year’s theme was, “Striving for Diversity,” and focused on the challenges and rewards of pursuing “big D” diversity beyond the baseline legal requirements. Attendees were treated to a wide range of presentations by leaders in the Diversity & Inclusion field.

Day one kicked off with Christy Kiely, a practicing attorney at Hunton Andrews Kurth, who helped attendees distinguish between “diversity” and “inclusion,” explained their interplay, and provided practical suggestions for institutionalizing their philosophies.  Following a short break, Marc Brenman, Managing Partner at IDARE, entertained and informed attendees regarding the numerous ways that organizations can measure diversity and its effects beyond employee demographics. After lunch, Karen Elkins Cohen and Adrienne Kimball of Rubicon Programs regaled attendees with their story about how their entire organization was literally transformed by and through diversity and inclusion philosophy. Finally, Sheridan Walker, Founder and CEO of HirePotential, took much of the “mystery” out of identifying and eliminating artificial barriers for individuals with disabilities and enlightened attendees on how making the world more accessible benefits everyone.

After such a jam-packed first day, attendees unwound a bit at the Biddle and AJE-sponsored cocktail hour held in the common area at the Prologis offices, a newly and beautifully renovated space that managed to bring the outdoors inside and feel both expansive and intimate at the same time. It was the perfect space to digest the day’s offerings, network, and follow-up with Biddle staff and Summit presenters.

Day two saw Biddle staff members Dan Kuang and Michel Pati breaking down the promises and actual capabilities of today’s artificial intelligence. The Summit wrapped with Candee Chambers, Executive Director of DirectEmployers Association, and John Fox, President and partner of the law firm of Fox, Wang & Morgan, waxing on whether and to what extent employers can make lawful gender and race/ethnicity considerations when making employment decisions in either the compliance or diversity contexts.

Those who were lucky enough to attend the pre-conference session with Dan Kuang got an in-depth look into the California Fair Pay Act—how it was conceived and how it is supposed to work—compared with other equal pay legislation. Pre-con attendees also received an easy-to-use compensation analysis tool and received hands-on training from the genius who developed it!

According to early feedback, the 2019 BCGi Summit was a smashing success. Executive Vice President, Patrick Nooren delivered his characteristically passionate opening and closing remarks and introduced BCGi’s new Director, Matt Nusbaum. Matt is already full of ideas for next year’s Summit, but he also wants to hear directly from the BCGi family regarding what you would like to see and hear at future events. Don’t be shy! Matt can be reached at mnusbaum@biddle.com.

We would like to extend our sincerest thanks to all who participated and presented at the 2019 BCGi Summit, making it such a success. And no small thanks goes out to Prologis for generously hosting the Summit at their innovative office space.