The National Industry Liaison Group’s (NILG) annual conference was held this week and attended by nearly 800 practitioners.  This is notable attendance in light of the fact that the conference was held in Charlotte, NC and several ‘would be’ attendees opted-out as a means of support to the LBGT community.

For their part, the NILG, its sponsors and presenters, including Biddle Consulting Group, were in Charlotte to reinforce their commitment to EEO, Affirmative Action, and equal access for all.  Participation in this year’s conference was meant as a strong statement to support the LGBT community and against the recent law passed in North Carolina which serves to diminish or eliminate their civil rights.

National Director of the OFCCP, Patricia Shiu, began the conference with a keynote address that highlighted the changes the Agency has made under her seven-year tenure, as well as restating the OFCCP’s vision and focus during the remaining years of the Obama administration.  Here are the highlights of Director Shiu’s address:

In addition to the OFCCP’s presence and the array of seasoned presenters, Biddle Consulting Group played a role in the success of this year’s conference by conducting two workshops:

Two primary metrics included in an AAP are comparisons of incumbency to availability and disparity analyses.  However, when was the last time practitioners really thought about them?  Are incumbency goals based on the best available data?  Do disparity analyses accurately reflect reality (i.e., how decisions were actually made)?  This presentation was designed for the new AAP developer as well as the seasoned veteran interested in improving the accuracy of their plan metrics.  Presenters: Patrick M. Nooren  (Biddle), Philip Akroyd (Biddle)

Too often, goals are seen solely as a recruitment issue…that by simply “casting a broader net,” an organization can make meaningful progress.  Unfortunately, this over-simplified strategy of addressing goals by only diversifying applicant pools while not addressing underlying roadblocks that may exist in the selection process(es) can often lead to elevated adverse impact results.  In short, organizations can “shoot themselves in the foot” by only narrowly focusing on recruitment efforts.  This session focused on bringing these issues to light so that meaningful action-oriented programs can be created.  Presenters: Patrick M. Nooren (Biddle), Criselda Cooper (Biddle) 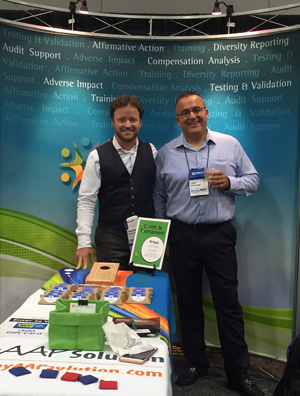 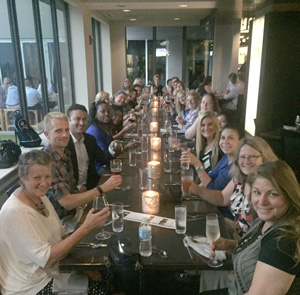 Dining with great clients, partners, and BCG staff. Thank you!

If you missed the conference this year, Biddle encourages you to bookmark the 2017 National ILG Conference scheduled for August 1-4 in San Antonio, TX, as a training destination for your EEO/AA needs.